How to Set Up an Office Studio, without Breaking the Bank!

Need A Studio for Podcasting, Webinars or Filming Content?

And… don’t want to spend a fortune?

Firstly, please understand that I am not tech-head, AV guy or expert in any of this!

I had a crack at setting-up studio to broadcast globally from the home office, starting with a basic set-up, and then iterated.

Here is exactly what I bought and where I got it, with a couple of exceptions.

For example, grab the Panasonic Lumix SLR Camera from Amazon, rather than the dodgy grey importer, who I would learn, got it from Hong Kong which took several weeks!

Little things are the difference between looking/sounding professional/credible verses ‘backyard’.

For example, check the first 5 seconds of this lighting video which talks about 3-point lighting.

I suggest shopping this stuff at JB HiFi if you need to go in person, or if you can wait a few days Amazon Prime rocks. You might also check eBay to compare prices. And a couple of little parts might require specialist stores, also online.

Consider spending few grand in gear to get the level of professional ‘finish’ that I feel comfortable with. That might sound like a lot, but compared to colleagues who have spent $150k+, it’s not so bad?

You might also consider saving some time and heart-ache by having a professional videographer set it up the first time? DISCLAIMER: I am not your man to set this up.  Or fix it when things go wrong. But I can put you in touch with professionals who might be able to help.

A final suggestion for live streaming, be sure to Get. Good. Internet. Period.

And a WATCH-OUT: No-one can guarantee a seamless experience across the streaming platforms (Zoom, Teams, Hangouts…). And if someone says, ‘I.T. says we have to use CISCO’, don’t walk – RUN! (I will share more about the broadcast platforms, with some tricks and tips in the next post.)

For now, read on for my thoughts that I hope will save you some time in trial-and-error based on what I learnt over the past year or so, iterating and improving the studio set-up

Need to do a quick piece to camera?

* NB Go for this omnidirectional version of the Rode Mic. (I will wager you that this item might just be the best value item out of this entire experiment!)

Tip #3:  Grab a second Lavalier Microphone and whack it into an adaptor, for 2 person interviews.** 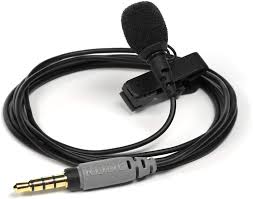 Tip #4: Lighting: Face the window. (However, clouds – or noise from cars, etc – are likely to stuff you up, as the come across, in my experience).

I seem to be doing video conference calls ALL day these days. So, do you think it's worth getting the set-up right? Here's what I am using: https://bit.ly/2XRnZFS

* NB. There might be a new model of this by now? Best to do a Google search. Autofocus is important. I bought cheaper webcam soon threw them in the bin. Invest in something good.

** NB. I got the more expensive colourful version for my wife, but this one goes great; I can’t see the $80 difference for the next level up?

Tip: Add a boom arm to get it up off the desk, to your mouth for podcasting $29

Lighting: I use these LED desk lights at home. They are dimmable and work well enough to improve the lighting beyond natural light coming into the room. $56

* My thoughts on the camera: This thing rocks! Ok, some geek stuff (cut/paste from my videographer, who put me onto this all-new Vlogging camera from Panasonic): The Lumix G100 can input clean direct into your PC computer with a camlink or atem mini, just have to download the software (check out the link).

Sound: Grab that Rode Lavalier Mic mentioned earlier and connect into this ‘Rode Wireless Go’ transmitter and the receiver clips into the camera. (The transmitter has a mic in it, so you can actually just use that, but it’s better with the Rode Lavalier Mic.)  Available in white or black. RODE WIRELESS GO COMPLETE MOBILE KIT $420*

* This kit includes the extra 2x cord/connector ‘bits’ you need AND a spare Lavalier.

Lighting There a so many options here, but in the end, I still use these softbox lighting kits $189

Tip #1: I have given you the LED version, but the old school fluro actually seem give off a softer light. It’s just that they make the room so bloody hot!

Tip #2: I also bought 2x lots of these after a while; sandbags – to avoid having the lights go @ss-over-head when I bump them.

All of this is just my opinion, not advice. I have no affiliation with Amazon, eBay or other stores.

If you do need advice, get in touch and I will happily connect you with an expert. 🙂

Coming Soon: All my webinar mistakes using Zoom and more (so you don’t make them too)!

By using the Service, you consent to our terms. We use cookies to help give you a great experience.